Canadians love to communicate. That is not a secret. Today the evolving and changing telecommunications landscape offers many different ways to communicate. Though it is unavoidable to look and examine in particular the traditional phone landlines; which no matter how you look at landlines extinction is a word that comes to mind. At least for a generation.

According to the 2016 Communications Monitoring Report published by CRTC, the landline sector lost subscribers at a 4.3% rate in the five year period between 2011 and 2015. If you compare that to VoIP lines in the same period, VoIP showed a growth of 11.6%.

The traditional landline is in a definitive decline. It is difficult the downward trend will ever see an upswing. There are many factors to count from the customer perspective:  cord-cutters, business globalization, cloudification of services, wireless-only, and a general millennial apprehension to anything that is ‘fixed’.

Yet there is a long way to go. There are approximately 15 Million landline phones in Canada,  of which about 40% are using some form of VoIP technology. Many users don’t know but cable operators in Canada use a variation of the technology called fixed VoIP or managed VoIP. The Cable Operators have in total 5,2M of phone lines in Canada. On the other hand, alternative VoIP or not big Telco providers account for 725,000 lines in Canada.  The variation used by alternative providers is often referred to as nomadic VoIP.

The irony of the stats

Comparatively, those using VoIP seem to be happier or have fewer issues. According to the Communications Monitoring Report published by CRTC, the number of Canadians contacting the CRTC, by issues related to VoIP services was 0.2 %; one of the least used reasons.

This correlates well with the data coming from the CCTS (Commissioner for  Complaints of Telecommunications Services) 2016-17 Report. It shows the big telcos atop, with Bell at #1 and almost all major telco incumbents are taking most of the complaints. Below we compiled our own Top 10 Telco companies based on the CCTS report, we have eliminated the service providers that are wireless or business only.

For VoIP Providers we see at:

We wanted to have a closer look at Canadians looking to switch carriers. We have analyzed our own data. Gathered throughout 2017, we have found that Canadians are definitively leaving landline and also looking to move away from big Telco companies.

The bigger, the bigger pie slice

Of the Big Telco companies, the majority looking to switch says they are currently with Bell (31%), followed by Rogers (16%) and Telus (9%). Those that reported Other (44%) currently have either a regional operator, such as EastLink or Videotron;  are using wireless only, a Competitive Local Exchange Carrier, or already are using a VoIP provider. 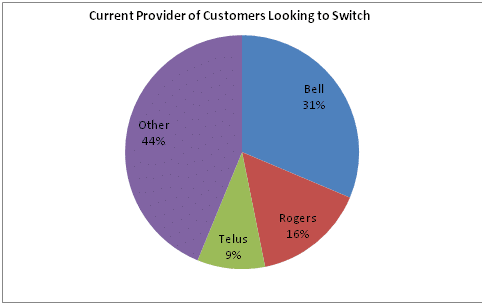 We looked at the savings to be obtained, based on the current provider. Again not surprisingly those switch-off Bell are the most benefited with over $300 in estimated annual savings. All figures are averages. In general, as with a car or home insurance all do better by shopping around and if it makes sense switching. 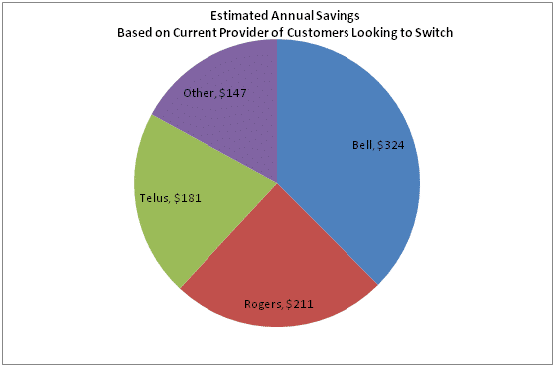 Also, we looked at where are the Canadians looking to switch; again not a surprise for Ontarians with 58%, followed by Quebec with 12%, Alberta & British Columbia with 10% each. The rest is more or less evenly spread all over Canada. 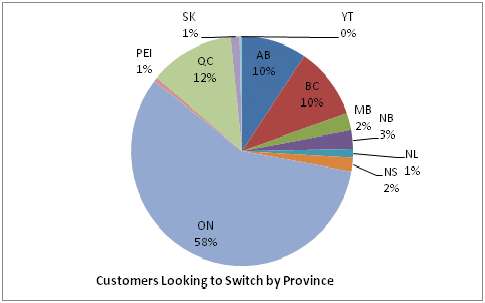 The fact of the matter is that telecommunications needs are not going away; the way we communicate is changing and it will certainly continue to do so.

There is an incredible opportunity for VoIP providers in Canada. With about 15 Million lines up for grabs. Traditional Telco has choices to make; either adjust to the times or let the traditional landline business go. It is in decadence at over 4% rate while VoIP lines are increasing almost 3x that. All providers need to be smart and savvy to capitalize on the opportunities.

In conclusion, this shows that the phone landline business is transforming. Bell landline customers look to be the most unhappy, the most looking to switch, and that those with Bell landline would save the most. It also shows that it pays to shop around and shopping for VoIP services wisely will pay dividends. Which as our study shows Canadians from all over have started doing. Have you?