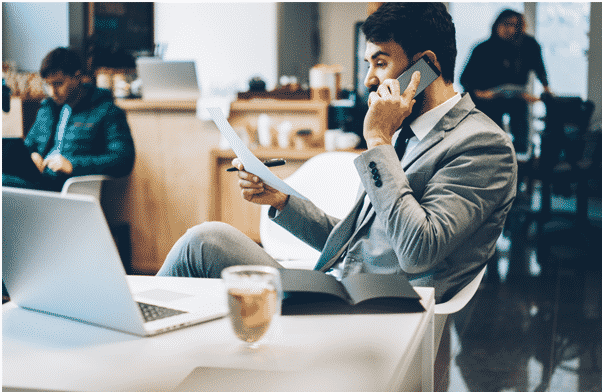 So you have decided to bring your business into the future with an online phone number. Great choice! Thousands upon thousands of Canadians have made the same decision, and with good reason: online phone numbers open up a wealth of opportunities for Canadian small business owners. They help increase your flexibility, ensure you maintain ownership over your number, and often come with additional (and highly useful!) goodies.

To help you along with your decision, we put together a handy how-to guide to how to purchase an online phone number in Canada. While as we said, it may seem complex at first, if you follow our steps, the complex becomes simple.

To make it as easy as possible, we start off with the biggest questions you might need answering and slowly work our way down to the nitty-gritty. In the end, you should have filtered yourself down to exactly what you need!

So again, online phone numbers have an incredibly vast array of options. There is a myriad of companies and possibilities. Do you want to pick a company that operates primarily in Canada? Or mostly in North America? Will you be doing business elsewhere?

But let’s not get ahead of ourselves. First, we should nail down some basic terms- or at least one basic term, VoIP, because it is going to come up a lot.

VoIP stands for “Voice over Internet Protocol.” While yes, though it sounds like something the Borg would say, it basically (for our intents and purposes) means the capability to send your voice over the internet. Oftentimes, when searching for the phrase “online phone number in Canada” you may find a lot of companies saying they are VoIP companies. This is what you are looking for, so do not be concerned if you find a lot of that.

So, when you are looking for a VoIP number, what are your priorities. This may be a frustratingly broad question, but it will make it super easy down the line if you have known from the beginning exactly what you are searching for and why you are searching for it. Are you looking for a bare-bones online telephone number from which you will literally just be making calls? Are you looking for something incredibly expansive, with all sorts of features and bonuses?

What will you want to primarily make calls from? Many online phone numbers in Canada allow you to make calls on computers as well as cell phones, but this isn’t universally the case. Some companies require you to use an app whenever you make calls, even from the desktop. This can reduce flexibility. Some companies say that they allow you to make calls from a hard phone (like those desk phones that everyone knows and loves), but then it turns out that you can only make calls from hard phones if you use THEIR specific desk phones, which adds to your costs. Knowing ahead of time will make your life simpler and will ensure that you will not be rushed into making any decisions you might later regret.

Set a Clear Budget for Your Online Phone Number in Canada

The next thing you are going to want to do is set a budget ahead of time and stick with it. There are going to be tough economic times, and they may be sooner than you think. After all, over the last few decades, Canada (and the rest of the world) has been hit with recessions and unexpected turbulence which, to the layperson, seemed to come more or less out of nowhere. This does not mean that you need to spend your life panicking or pinching pennies, but you should be aware of your financial future and plan for it accordingly.

How does this all relate to getting an online phone number in Canada? Well, most contracts operate on a monthly basis (unless you go with a company which tries to force you into a difficult to get out of long term contract), which means that every single month you are going to have to pay your phone bill (like any other bill) if you want to stay connected. Now, because there are just so, so many options, this will not exactly break the bank, but you should still be aware of having to pay every month. The last thing you can afford to lose—pun very much intended—is your phone number, online or otherwise.

So you should have an idea of how much you want to spend. Now obviously this all depends on some later options, like what you want to come with your phone number, but we are addressing cost first because it will make it easier for you. Before starting deep research on finding an online phone number in Canada, make sure to lay out a clear and solid price floor and a price ceiling. While the price floor is obviously not super critical—if you can get a higher amount of features for a lower price than you originally expected, that’s great—the price ceiling must be a red line for you throughout. Some of the more unscrupulous companies are going to try to get you to break through your price ceiling- only, unlike the glass ceiling, this is a ceiling that should probably remain unscathed. Make it a red line and refuse to budge on it.

Decide What Your Online Phone Number is Being Used For

After you set those standards, it is time for you to make the next thing clear for yourself: specifically, what you are going to be using your online number for, and why.

Are you going to want to only have yourself running the account and making calls on it? If that’s the case, it is going to make searching pretty easy, as there are a lot of bottom-barrel companies that just sell people numbers for the sake of selling single numbers with not a whole lot of additions.

But even then, you may want to also consider why you are getting it. Is it something you literally just want to make calls with? Or will you also want to text with it? A lot of those bottom-barrel companies may not offer those additions.

Will you have a lot of people using the number, say, in the double digits? And will they all have their own numbers, or will they use your single number? You may want to focus on companies that offer multiple numbers in a single package, or else you could end up paying a lot of extra dough which you otherwise really would not have had to have paid at all for an online number in Canada.

Will you be on the go quite a bit, or will you be mostly stationary? If it’s the former, you will want something which maximizes your flexibility and ability to log into your account to make calls (as well as your ability to make the calls themselves, of course).

If it is the latter…well, to be quite honest, we recommend that you consider flexibility anyway. You never know where your business is going to take you, and it could really help you out to be able to be as flexible as possible.

Look for Features Which Can Come With Your Online Phone Number

You have now decided how you are going to use your number. Great! The final step is going to be deciding what extra goodies you want for yourself when you are using your online phone number in Canada. Are there other things in your business plan you would like to fill in? Perhaps you have been looking for an easier way of managing social media, or you want a place to actually store all of your voicemails and call records other than your cell phone.

Phenomenally, all of those things can be accomplished with an online phone number!

So here’s the thing you may not have considered at first: a lot of online phone number companies offer services other than just phone numbers, and those services almost always come with the number.

For example, say you get a number. Okay, great. But how will you listen to voicemails? Some companies allow you to automatically transcribe them and send them to your email. Some others allow you to listen to recorded phone conversations. Others allow for seamless integration of your social media accounts!

What you really need may not be what you got

That matters too- you will want to get a number that can actually be used with these products without getting hoodwinked into having to buy more hardware.

It makes your decision a bit more complex in the end, but it is a really important decision to make. Do not just rush by it- if you really think long and hard about it, and you are realistic about what you want, you will end up coming to a great decision.

In Conclusion: Try MightyCall for your online phone number in Canada!

One of the companies which do all of the above-mentioned things is MightyCall. They allow for seamless control and oversight for your social media accounts, to transcribe voicemails, to record your calls, and so much more. Plus, if you are thinking of expanding, they also allow for limitless extensions- which means you won’t have any trouble adding new employees.

Upgrade and expand your business with MightyCall. Get calling today!